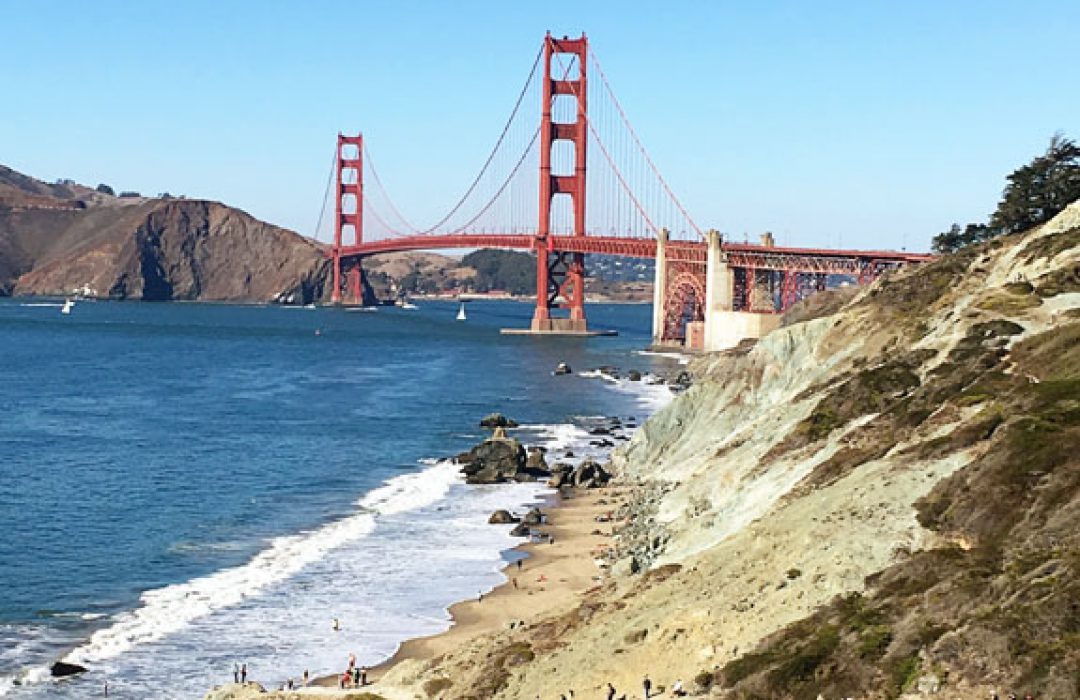 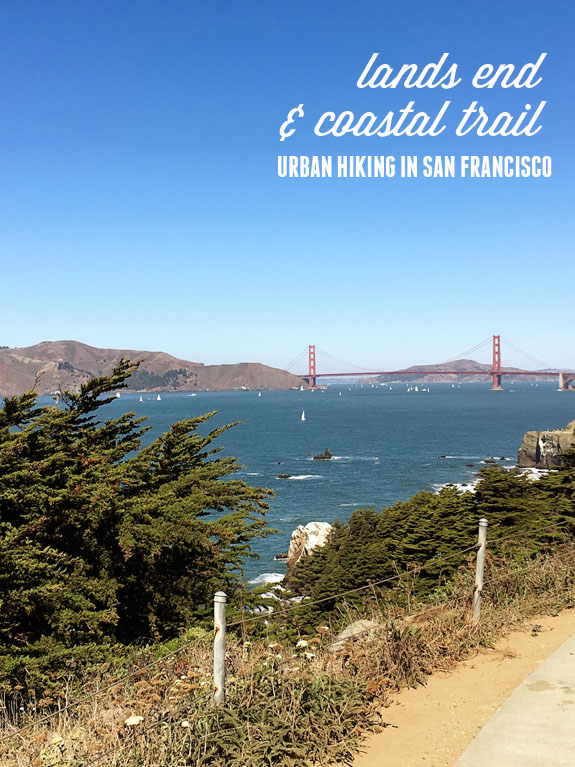 One of the things I love about San Francisco is the fact that it’s a big, urban city, but there are pockets within it that feel like a whole different world. An example of this is Lands End and the Presidio, where the beauty of nature shines through and you forget that you are in a major metropolis. 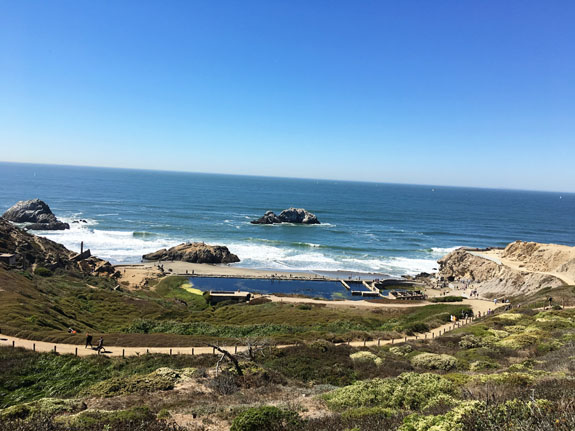 I first stumbled upon Lands End on one of my SF trips years ago, when I was still living in LA and visiting my friend Elaine. I had to find ways to amuse myself while she was at work, and I decided that I would explore and head out to Ocean Beach. From there, I climbed up the hill to the Cliff House, to the Camera Obscura, and just kept going until I stumbled upon an amazing view of the ocean and the Golden Gate Bridge. It has been one of my favorite places in the city ever since.

June organized a group hike for her dog’s birthday, and I was super excited to go back to Lands End. Even better was the fact that the weather was gorgeous – which is rare in this part of the city (but Lands End is also pretty magical in the fog).

The actual trail head starts a bit past Cliff House. There is a visitors center right near the start, and a turnoff to go down the stairs to Sutro Baths, which was a glamorous bath house in the early 20th century. 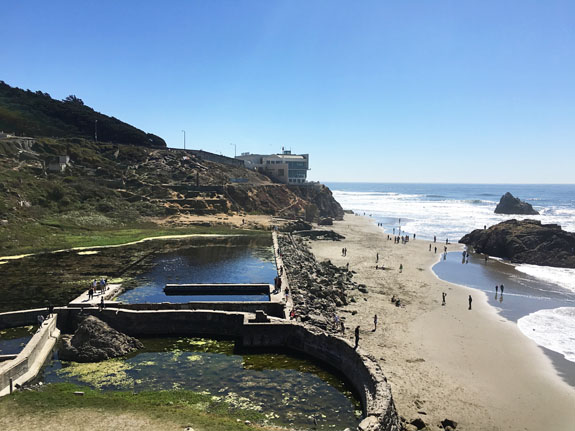 The structure was burned down by a fire in the 1960s, and these ruins are all that remain. This is also another one of my favorite things in the city – it’s one of my favorite spots to take photos! The textures, the reflections, and the view of the ocean makes for some great images.

We then climbed back up towards the main part of the trail, and were treated to this  view of the Golden Gate Bridge peeking out. 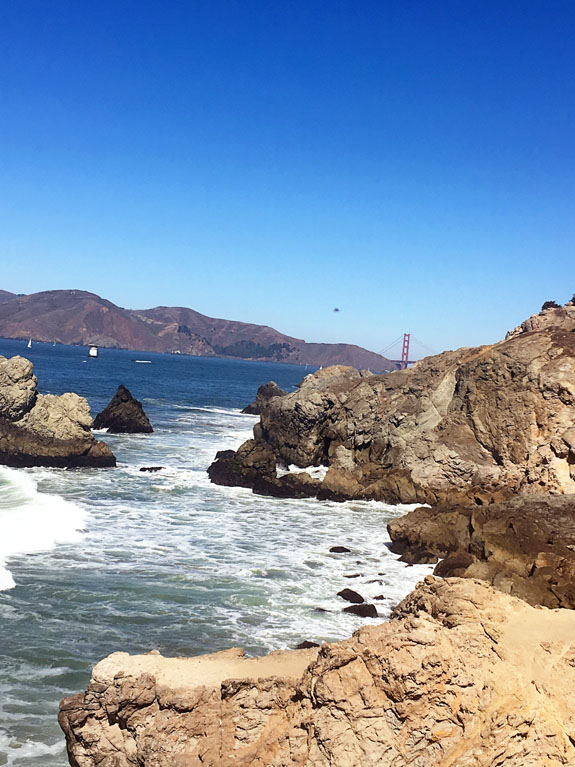 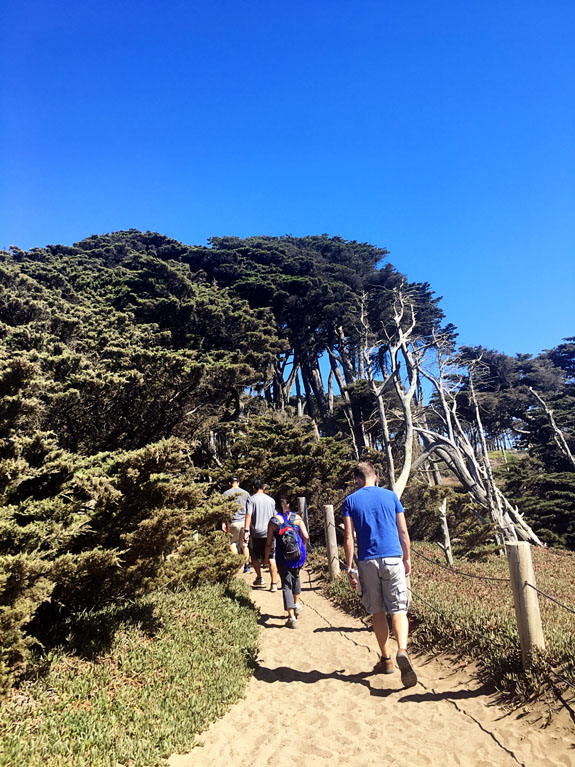 I love the cypress forest here, and they make a great backdrops during photo shoots. And, when you win with the weather and come here during golden hour, the light streaming through the trees is absolutely magical (I actually did do a shoot here recently and will share those photos in a post shortly). 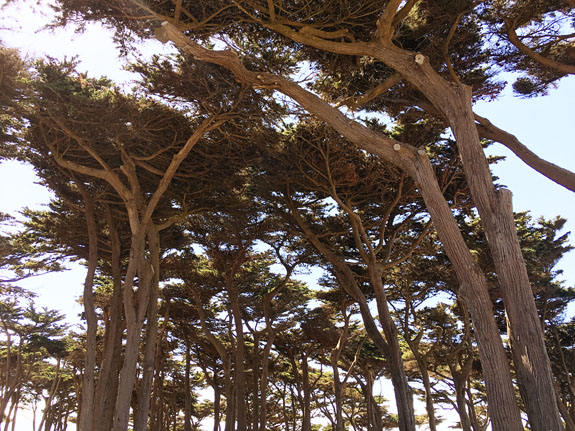 There are stunning views of the Golden Gate Bridge and the rugged coastline all throughout the trail, and the bridge becomes closer and closer as you go on. 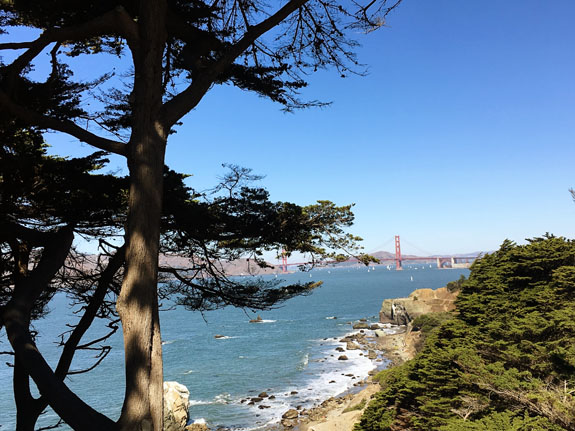 The bridge is one of those things that still blows me away even after all these year. That pop of color always catches my eye and captures my heart every time I see it. 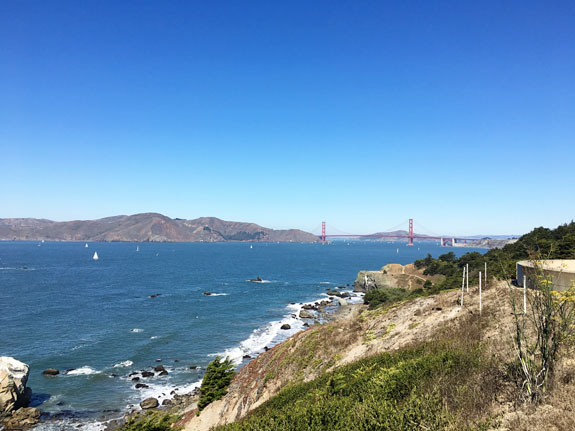 You can see remains from 3 shipwrecks from the trail, and there is also a turnoff for another trail that leads to the Legion of Honor. There is also another detour to a labrynth (I really want to do this next time, but I always forgets that it exists!) The trail ends when it hits El Camino del Mar (near 33rd Ave). From there, you can turn back, walk to the Legion, or continue along to the Golden Gate Bridge. 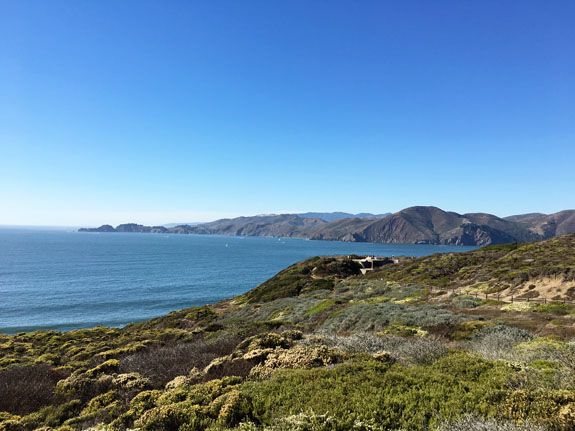 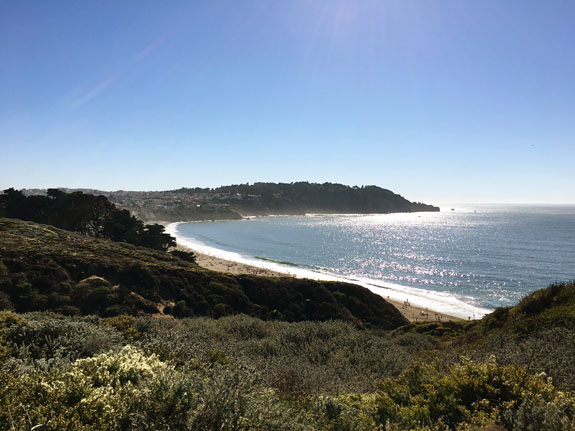 The trail will lead into Marshall Beach, which has stunning rugged coastline and super epic views of the bridge. It is a bit hilly and there are many stairs in this part of the trail, but it is also the most beautiful part. 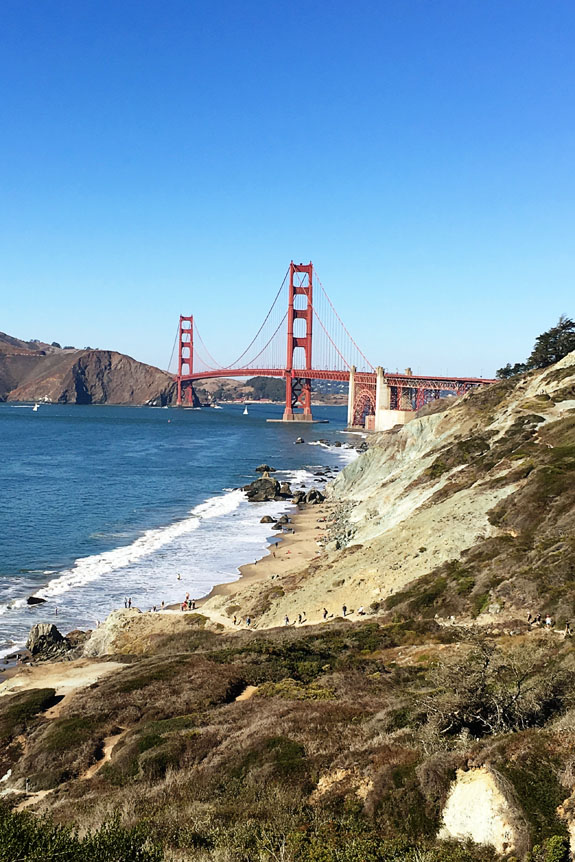 I really want to come back here and walk down to the actual beach part and hang out. It really looks spectacular.

From there, there is a view point as you get closer to the bridge. 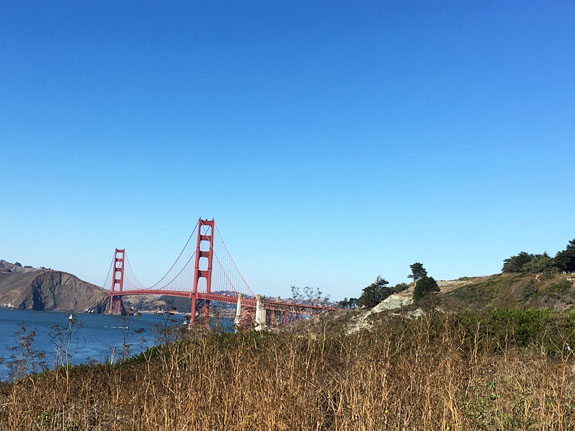 Soon enough, you will get to the Golden Gate Bridge vista! Again, I am still totally and completely blown away by the bridge  (is that cheesy?). 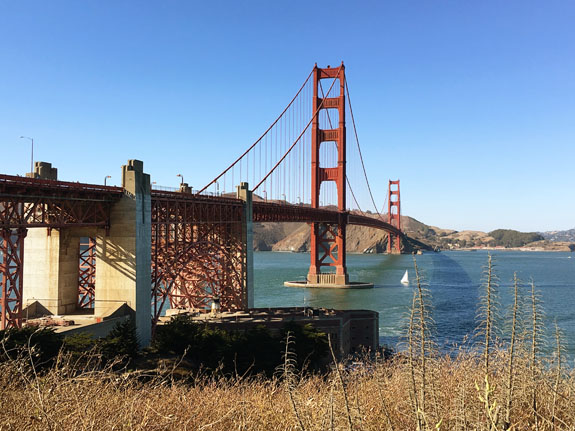 We opted to walk down the trail that leads to Crissy Field, which is also another one of my favorite spots in the city for the grassy knolls, the wide open space, and the view of the Golden Gate Bridge. 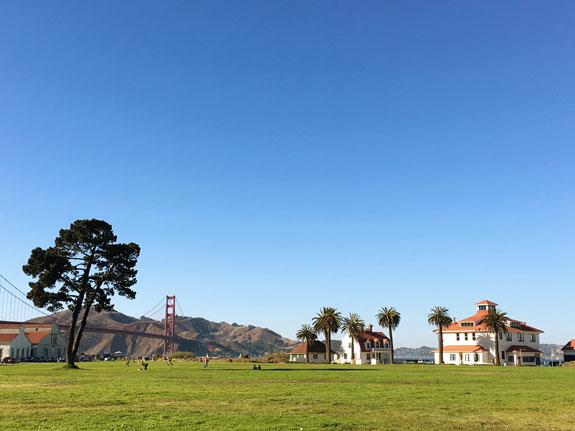 All in all, it was about 5 miles from start to finish. Seeing all this beauty in this part of the city made me really, really thankful to be able to call San Francisco home.

An Afternoon in Pisa

2 Days in Florence: What to Do, See and Eat 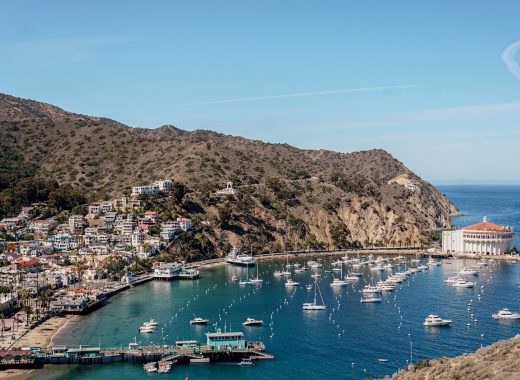 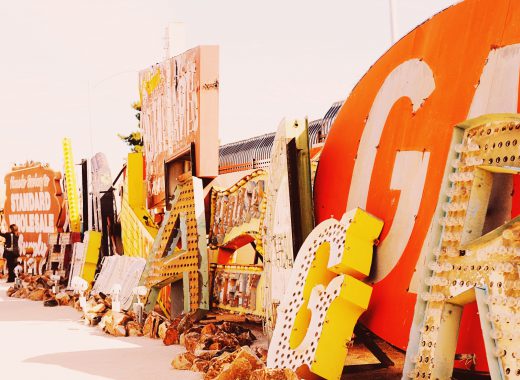